The Frack Free Future campaign has released a scorecard assessing the main political party positions on unconventional gas and fracking as WA prepares to head to the polls on March 11th.

Rating the parties on a school grade system, Frack Free Future awards the Liberals a ‘complete fail’ F grade for their gung-ho support for the controversial fracking industry. 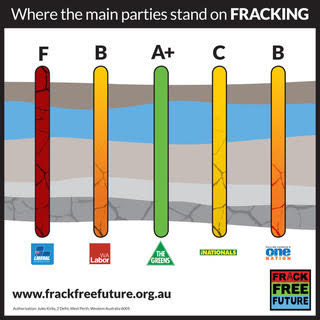 Top of the pack come the Greens with an A+ on account of their call for an immediate statewide ban, the granting of veto rights for communities to block fracking companies coming onto their land, and their commitment to a 100% Renewable Energy Target which would kill demand for more gas anyway.

Labor is graded a ‘more work to do’ B, attributed to a potentially strong moratorium (temporary ban) position weakened hints that process could lack rigour, and a failure to support veto rights for communities.

One Nation and The Nationals score ‘B’ and ‘C’ respectively. 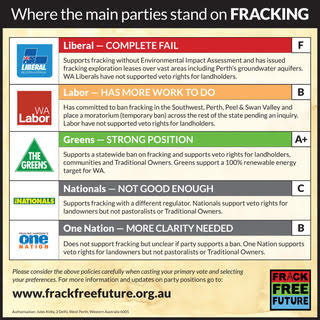 “Fracking has been shown to be responsible for serious health, water and environmental issues overseas and in the east, and with the industry poised for a massive expansion in WA is vital people know where the parties stand on this issue” said Kirby.

Fracking has proved a significant issue in every recent state election in Australia. As a result Victoria has opted to ban fracking completely, and NT Labor won office promising a fracking moratorium, with commentators citing fracking as one of the reasons voters abandoned the previous NT government in such numbers.

Health researchers in Pennsylvania, US, recently published further evidence of a link between shale gas fracking and human health impacts. These include birth defects, asthma and migraines. Shale fracking in Pennsylvania is similar to what we could see across much of WA.

And in December the US Environmental Protection Agency published a damning report confirming fracking caused significant and sometimes permanent damage to water sources at ‘every stage of the process’.

“Let’s give them all a fair hearing, weigh up what they have to say and then, whoever we’re voting for, make sure it’s a vote for a frack free future”.