Some of Australia’s most prominent voices including Paul Kelly, Jimmy Barnes, John Butler, Peter Garrett, Missy Higgins, Tim Winton, Fiona Stanley, Janet Holmes a Court, Carmen Lawrence and Peter Newman have united in a call to Premier Mark McGowan to protect the Kimberley from the controversial practice of gas fracking. 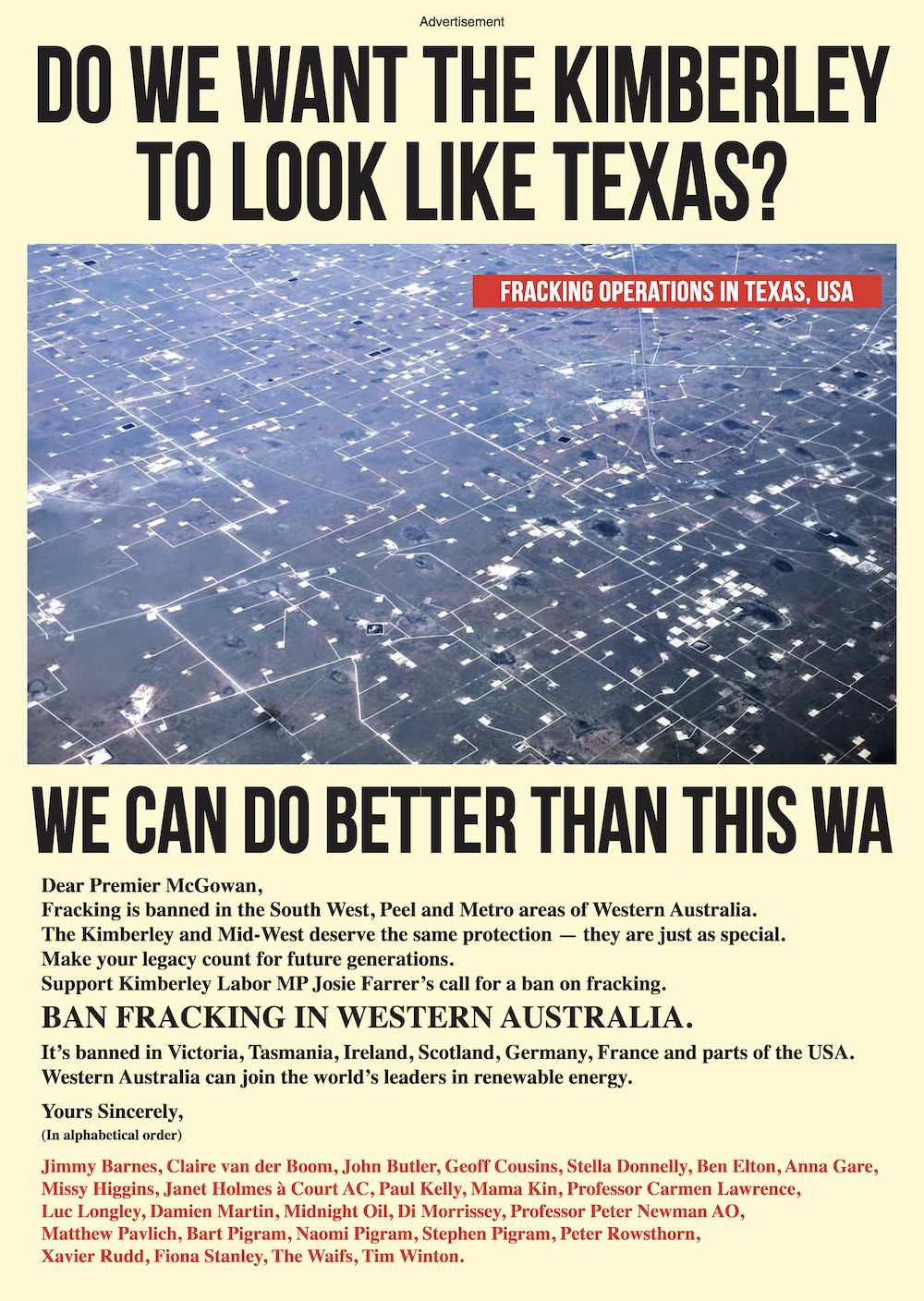 The Kimberley is one of the world’s outstanding natural landscapes that has been under the continuing custodianship of Aboriginal people for at least 60,000 years. It is recognised globally as having the most intact coastline, comparable to the Arctic and Antarctica and also has the world’s largest, most intact, tropical savannah.

The West Australian McGowan Government was elected on a platform of banning fracking in the South West of the state with a moratorium elsewhere, including the Kimberley, while an inquiry was conducted. Labor also promised veto rights on fracking for Traditional Owner groups in the Kimberley.

The Inquiry has now reported to the government but its content remains under wraps. A decision is expected before Christmas as to whether fracking can take place in the Kimberley and the Mid West.

Kimberley Labor Member of Parliament Josie Farrer has called for a statewide ban on fracking, and Member for Swan Hills Jessica Shaw has publicly supported this position. It is known that many other MPs and Ministers in the WA Labor Government do not want fracking.

With a decision imminent, prominent West Australians and Australians including musicians, writers, business leaders, medical experts, tourism operators, and sports stars have united in a call to protect the Kimberley from fracking.

In an open letter published as a full page advertisement in the West Australian newspaper today, they have acknowledged that fracking has been banned in the South West, and that the world renowned Kimberley and important farming areas of the Mid West deserve the same protection.

They are calling on Premier McGowan to ban fracking through the whole state not just the South West.

A recent report has shown that fracking in the Kimberley’s Canning Basin would prevent Australia from meeting its international obligations on climate change under the Paris Agreement. Instead, Western Australia could join world leaders in renewable energy.

Today’s call adds to an open letter that was delivered by some of Australia’s leading climate scientists and experts calling for fracking to be banned in WA due to its unacceptable climate change impacts.

“We’re uniting in our call on Premier Mark McGowan to introduce a statewide fracking ban. The evidence about the negative effects of fracking on people and the climate is clear and compelling. By banning fracking in the South West, the Premier has acknowledged that this is not a safe industry. Communities in the Mid West and Kimberley deserve the same protection,” said former WA Premier Professor Carmen Lawrence.

Professor Peter Newman, WA Scientist of the year said, “After the IPCC’s warnings about the need for renewed climate change action, opening up one of the world’s largest fossil fuel deposits would be irresponsible. The north of WA has such huge potential in renewable energy, which is now cheaper than gas and can be exported. This is what the State Government should focus on for the sake of our grandchildren.”

“The Kimberley is under attack from all sides at the moment. There’s a whole battalion of industrial and political players that want to make the Kimberley the next Pilbara and we all know how that worked out for the locals there on the ground.

“Now they want to start an onshore empire in the Kimberley with a proposed 40,000+ gas fracking wells. That’s one per person in the region!

“This is an industry that has left destruction where ever it operates. Drilling through precious water aquifers, exploding charges and releasing toxic chemicals. Flaring off harmful gases and leaving land owners and traditional owners no right of veto on whether or not the industry can use their land. This industry stinks from top to bottom, verges on environmental terrorism and we have no choice but to draw a line in the sand and stop them.”