Government must keep promises on fracking; Inquiry report should be released

Conservation groups have called on the McGowan Government to keep its pre-election promises on fracking and to release the final report of the Fracking Inquiry, which was handed to Government yesterday. 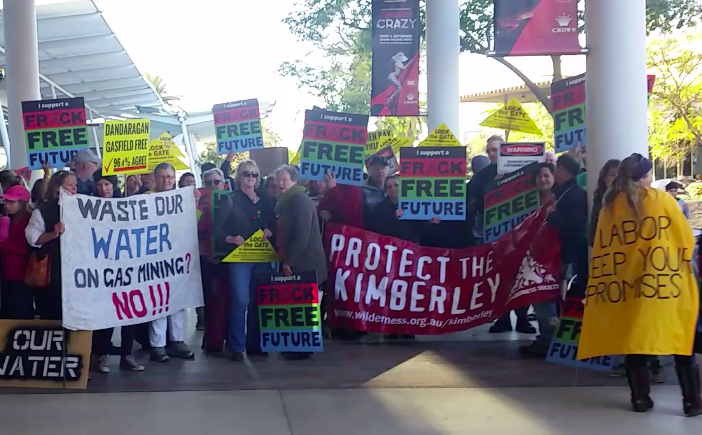 The election commitment also stated that fracking would not be allowed “until such an inquiry can demonstrate that the process will not compromise the environment, groundwater, public health, or contribute adversely to climate change.” (Mark McGowan, Leader of the Opposition, 2017)

Conservation Council of WA (CCWA) Director Piers Verstegen said Western Australians had demonstrated overwhelming support for the moratorium on fracking before the 2016 election, and were now calling for a permanent ban on the practice.

“The overwhelming balance of evidence submitted to the Fracking Inquiry demonstrates that this industry cannot operate without compromising the environment and groundwater, risking public health, and contributing to climate change.

“With an abundance of conventional gas and renewable energy opportunities here in WA, there is absolutely no need for a fracking industry to risk our land, water, communities, and climate.

“Thousands of community submissions and hundreds of experts provided input to the Fracking Inquiry, calling for a permanent ban on fracking. These submissions outlined the following unacceptable risks of fracking:

“Given these risks, it is clear that the moratorium on fracking should be extended into a permanent statewide ban. That is what communities across the state, as well as farmers, Traditional Owners, conservation groups, doctors, academics, groundwater experts, and many others are now calling for.

“We congratulate Labor MPs Josie Farrer (Kimberley) and Jessica Shaw (Swan Hills) for their public support to ban fracking statewide, and we call on Mark McGowan and the rest of the WA Labor team to heed these calls, which are backed by the community and science.

“As a sign of good faith, the WA Government should release the Inquiry report immediately, so that the thousands of people across WA who are concerned about this issue can see what it has recommended.”