The climate science is clear

“The vast majority of fossil fuel reserves need to be left in the ground and unburned." - WWF Scotland Director Lang Banks.

Governments cannot rely on shale gas as a relatively clean “bridge” from dirty fossil fuels to non-polluting renewable sources such as the sun, winds, waves and tides. Industry officials and some governments are promoting natural gas as a “clean, green” fuel, but studies show that fracked natural gas can produce as much greenhouse gas (GHG) emissions as coal.

1. Air pollution from a wide range of hazardous air pollutants released in venting and wastewater evaporation.

2. Loss of large areas of farmland and bushland from well pads, pipelines and roads.

3. Fugitive emissions from leaks in wells, pipes and infrastructure.

4. Contamination of underground water resources due to well casing failure.

5. Soil and water pollution from leakage and overflow of toxic wastewater from holding dams.

6. Soil and underground contamination from reinjection of improperly treated or untreated wastewater.

7. Pollution of wasteways from wastewater and chemical spils and release of improperly treated wastewater.

8. Migration of gas and toxic substances into groundwater through natural faults and fracking induced pathways.

9. Water, soil and crop contamination from reuse of improperly treated of untreated wastewater on farmland.

10. Noise and air pollution from trucks, drill rigs and machinery. 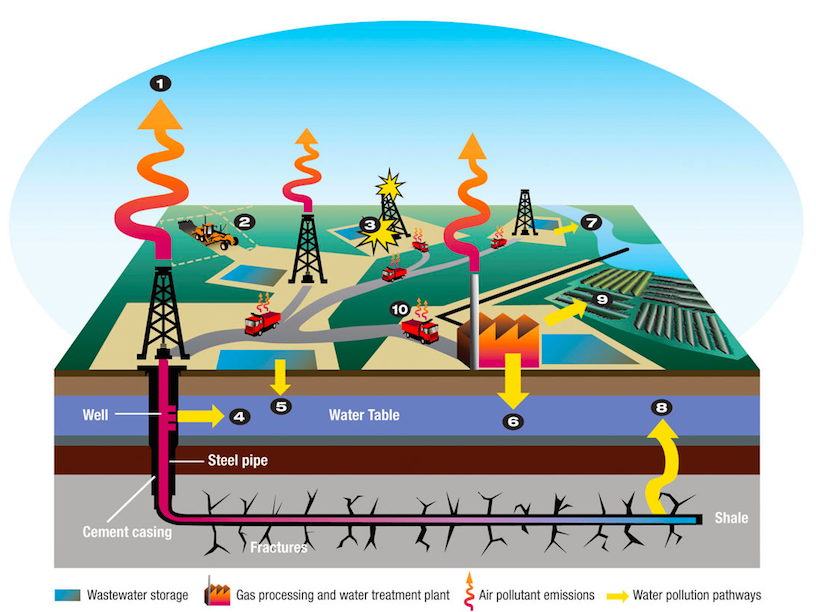 We must learn from past examples in the United States and in Queensland before it's too late.