If you’re reading this then the chances are you’ve heard some pretty worrying stories about the impacts of the unconventional gas and fracking industry elsewhere, and you’re worried at the prospect of it sinking its teeth into Western Australia.

You’re right to be worried – this dangerous and accident-prone industry is responsible for appalling environmental and health impacts in our eastern states and in the US in particular.

And here in the Perth metro area we’re all the more vulnerable given our dependence on critical groundwater sources. Did you know we get half our drinking water from these aquifers?

But it’s one thing being aware of the issues, and quite another to know what to do about them.

To ensure WA is protected from this industry we need see three key things happen:

1. A statewide moratorium (temporary ban) on unconventional gas and fracking. This must protect WA for five years while an independent consultation and science-based review determines whether the industry is safe and welcome.

2. An immediate permanent ban in sensitive areas such as National Parks, productive farmland and water catchments.

3. The right for farmers, leaseholders and Traditional Owners to say no and refuse gas exploration and production on their land.

So how do the parties fare on fracking? 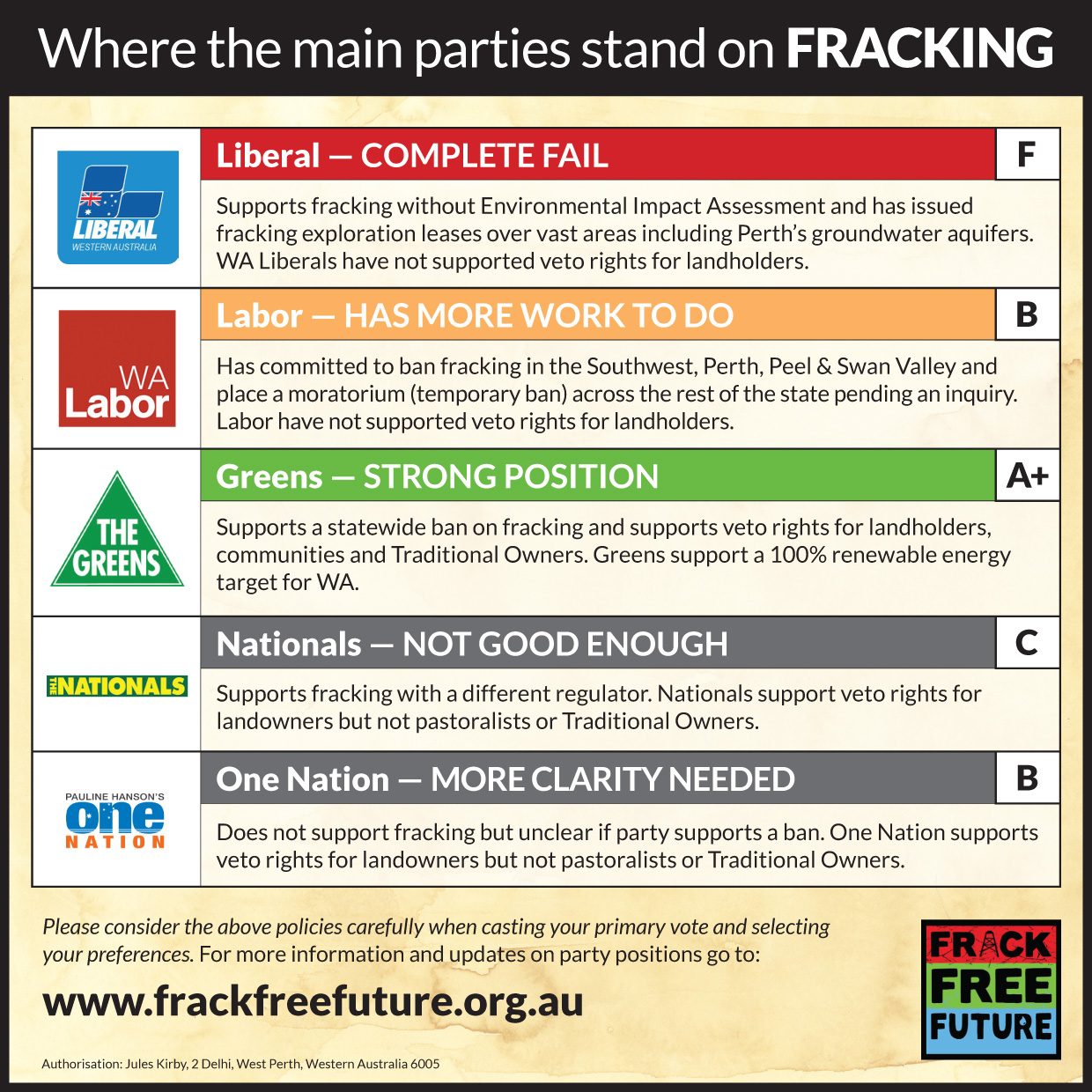 With the election now just days away, fracking is shaping up to be a critically important and vote-determining issue in the key battleground marginals in particular.

We’ve been pushing the parties again over these last few months, and though there’s still room for them to update and improve, it’s time we gave them a score on their fracking policies. We can’t and won’t tell you how to vote, but we hope the scorecard helps you make up your own mind when it comes to fracking at least.

The Liberals come out with a clear fail. Barnett announced at his party conference speech that he’s square behind ‘fracking done safely’, and has continued pushing that line in public and private. There’s absolutely no evidence fracking can be done safely, and plenty to show it’s been extremely damaging. We’ve even seen significant leaks in the dozen and a half sites fracked in WA so far. That’s an appalling track record. Yet the Libs are ignoring the science and ignoring public concern. Our verdict: F.

Labor started very well, and right back in 2015 to boot, when the party committed to a statewide moratorium (temporary ban) on fracking. Then last October we heard Labor leader Mark McGowan announce a new Labor government would commit to a ban on fracking from the Southwest through the Peel and Metro regions up to the Swan Valley.

Great, but immediately after that announcement he went to the Chambers of Commerce and announced there’d be no further regional bans and that the moratorium process would be got through ‘expeditiously’. That’s the last word you want to hear describing what ought to be a robust and evidence-based process with a full public consultation. Which is why we’re saying the moratorium needs five years – to ensure those processes are completed properly, and the scientists have the chance to answer the key questions as to whether fracking can be done safely here.

Labor has also failed to move on community requests for a right to veto gas companies coming onto their land to drill and frack. So what initially showed promise of becoming a much stronger position has stalled. Their position is good, but Labor has more work to do. Our verdict: B.

Greens are ticking all the boxes, basically. They’ve bypassed calling for a moratorium to say they’d go straight for a permanent ban. Some of us think the people and government of WA should be allowed the space and time to investigate the issue and come to a conclusion that way; others think there’s good argument for a ban right now. No problems with that. Additionally the Greens support veto rights for the range of communities. And for bonus points, they’re aiming for 100% renewable energy, which would kill demand for gas anyway. Our verdict: A+

The Nationals support fracking, though recognise it should be regulated by a different body to the Department of Mines of Petroleum (DMP). Having the DMP in charge is as perfect a case of putting the fox in charge of the henhouse as you could imagine, so no surprise we’ve seen such appalling decision-making and dishonesty coming out of that department. The Nationals also support veto rights, but only for private landholders. Traditional Owners and pastoralists would have no such protection under these plans. Our verdict: C

One Nation: Well, it’s hard to know for sure what these guys think, so contradictory are their statements on fracking. The closest they’ve come to an official statement says they ‘do not support fracking’ in WA, which is great, but not quite the same as ‘opposing’, or calling clearly for a ban or moratorium. Still, to ‘not support’ fracking is a good step further than the Libs and Nationals who certainly do support fracking, and to boot One Nation are behind a right for private landowners to veto gas companies coming onto their land. Like the Nationals though, Traditional Owners and pastoralists are left out. Our verdict: B.

So that’s where we see the parties standing at the time of writing, with less than a week before the election. But their positions may well change. Not only that, plenty of candidates are willing to step beyond the party line and commit personally to being strong on the issue if elected, whatever party ends up in government.

So when voting, please consider doing these things:

1. Make fracking a central issue in your decision-making process, drawing on this scorecard if that helps;

2. Check out the latest party position in case of changes. We’ll try to keep you updated too;

3. Consider your local candidate’s own views – is he or she ‘better than the party’?

Whoever gets elected, let’s hope what gets delivered is a Frack Free Future for WA.